I am trying to not upload pictures of days 2 and 3 (I’ve actually done work on both) as I consider them spoilers.  I’ve already released quite a few from day 1.  The photos I am posting here are “placeholder” pictures that are not even used in the game.

Day 2 consists of three paths with 5 events, all having some kind of puzzle aspect.  These basically work like the downtown adventures of Date Ariane, or the puzzles from the 4th story of Something’s In The Air.

One path is a hike to a waterfall.  I decided I wanted this to be an all day activity, and needed a really special puzzle.  My first thought was a classic adventure game where you have to build something to move on, my second was some kind of “escape room” type of puzzle.  I felt both were kind of lame, but then found a way to combine the two ideas, to make something really great, and I’ve been working on this path extensively to get it to work the way I want it.

Path two consists of a day on a crowded beach.  If your game is set on a tropical paradise vacation, there’s got to be a visit to a crowded beach somewhere.

I haven’t written it yet, but I do have a puzzle figured out which you can succeed or fail at,  the thing is I am still thinking about what happens when you succeed and when you fail.  Besides swimming, tanning, drinking, and getting sand everywhere, what is there to do on the beach? 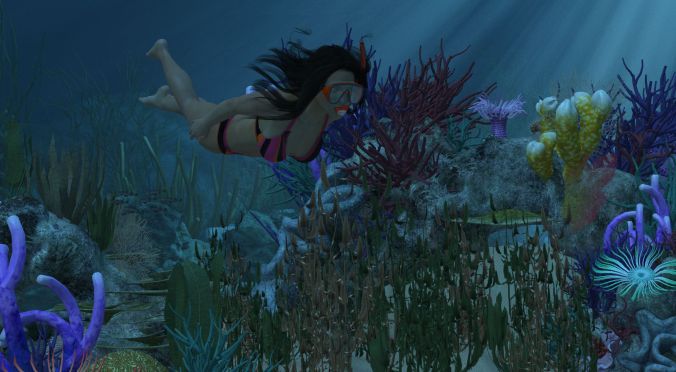 Path 3 is a snorkel trip to a coral reef.   All I’ve really done on this one is enough set building to make this picture.  Not sure what I want to do, yet.

But I’m leaning towards borrowing an idea from Chaotic’s Miranda which involves a game of hide and seek in the coral.  Find Ariane before you run out of air.  Again, not sure of the rewards and punishments based on success and failure.

Two of these paths, beach and coral, are morning only.  I want to create two afternoon activities.  One idea is a trip to a casino to play roulette.  The twist on this puzzle: You actually play a game of roulette with a number of random success and failure outcomes, again haven’t written them yet.

Anyways, that’s enough updating, I better get back to work. 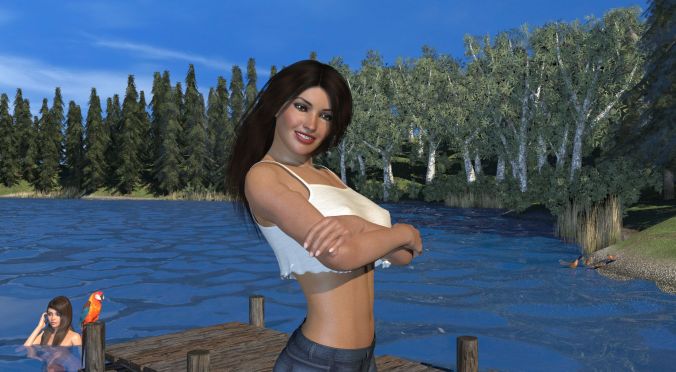 Ariane in Paradise is divided up into 3 days, each one being sort of a mini visual novel, which if successful leads to the next day.

I recently completed  “Day 1”, meaning I’m a third of the way done.  Day one, like act 1 of a story, is about establishing character and settings.  Day 1 objective is to learn 4 things about Ariane: She likes dancing, gymnastics, astronomy, and outdoor activities.  Of course if you play Date Ariane, you already know these 4 things about her, but it is all about getting her to talk about herself and ask the right questions. to get the right responses.

Meanwhile, you can talk about yourself and make decisions about your character as you do.  The main decisions:  business trip vs. vacation trip, rich vs. middle class, business degree vs biology degree vs never went to college,  outdoor enthusiast vs science geek.  There are a couple of others, but they only affect minor dialogue choices.

Finally, Day 1 is about establishing the setting. There are three main paths the story can take.  One focuses on the island’s past, one on the present, and one on the future.  From a Date Ariane perspective, Day 1 = before and during dinner.

I practically have to start over to establish day 2.  From a Date Ariane perspective, Day 2 = downtown and outskirts.  Day 2 involves 5 new paths, 5 new sets, and different wardrobe and dialogue for each and a “game” of some sorts in each, without repeating myself from DA or SITA.

This last part is the biggest challenge.  One of the 5 sets is set in a casino, so creating a “game” challenge is pretty easy for that one.  Another one is going to a beach. Besides swimming, tanning, drinking and getting sand everywhere, what is there to do on a beach?  and how do you make a game of it? 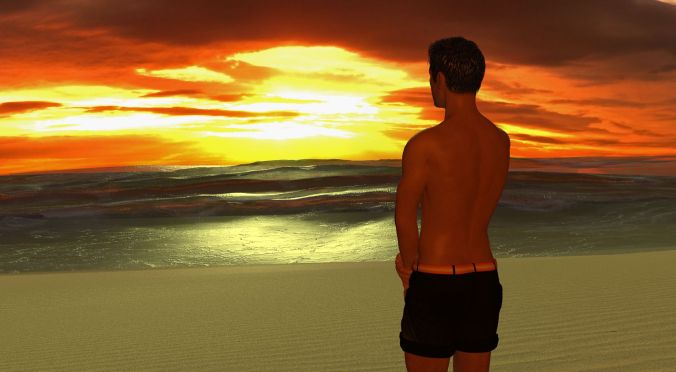 These are the challenges I give myself, and of course the fun is in solving them.  Maybe in another 9 months or so I can say Day 2 is done and then I can start Day 3. 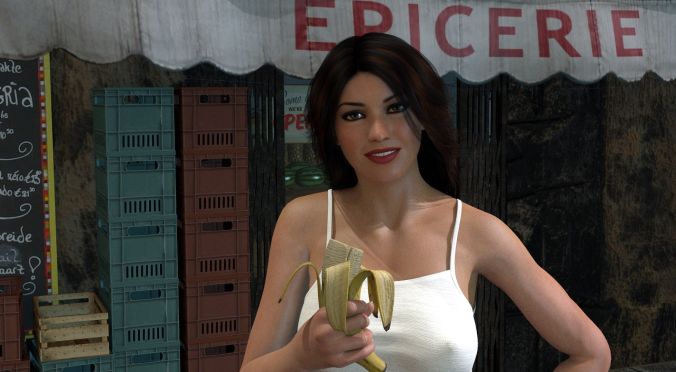 I’ve been posting random pictures I’m making for the game on other social media. Thought I’d collect them here in one post.

Here is a render I really like of Ariane eating a banana in front of a grocery store.  Some have pointed out that the banana looks huge. I think that if you are on a tropical island where bananas are grown you are likely to find bigger and better bananas. At least that is my story.

“Epicerie” is French for Grocery.  Notice that the chalkboard sign is in French as well with prices in Euros. This is partly due to the grocery store prop came that way, but also due to a conscious design decision on my part.

If I am going to make a fictional tropical island, I need to make some decisions like what language they speak there. Looking at a map of the world and tropical islands there in, I decided that French speaking islands are the most common. French speaking islands exist in the Mediterranean (Corsica), Caribbean (French West Indies), the Pacific (Tahiti and the rest of French Polynesia), and the Indian Ocean (Seychelles, Reunion).

Therefore as a fictional member of Overseas France, most of the predominant signage should be in French, and prices in Euros. But to attract English speaking tourism, there will be a lot of stuff in English as well, like the “Come In We’re Open” sign.

I dubbed the island “Duquesne” (pronounced “doo-cane”) after a tiny town in Arizona. It sounds French and a little exotic, even though it is also the name of a University near Pittsburgh.  I googled it to see if an island by that name exists, turns out there is one in a lake in Ontario Canada, which was the set of a fake documentary made in Canada.  (I had to change my VPN to a Canadian ISP to watch it, it’s hilarious)  That made me want to keep the name even more.

I also came up with a whole backstory to the island, but I’ll save that for the game. 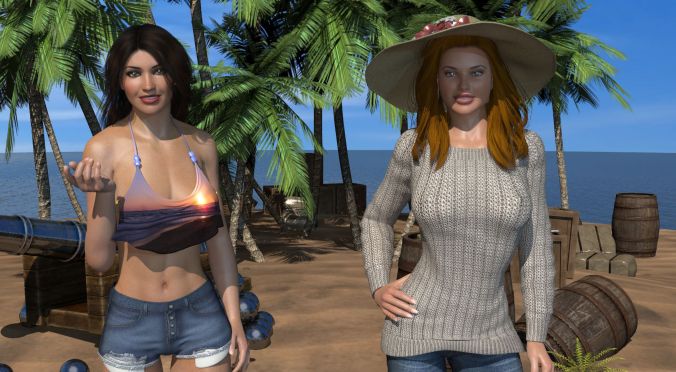 As promised Rachel makes an appearance or two. The weird pirate stuff in the background and Rachel’s goofy hat have logical explanations. 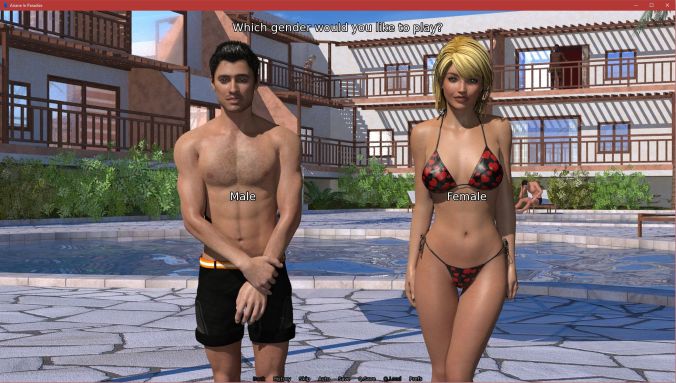 Here’s the first actual screenshot of the game. As promised you can play as a buff and tan male or female, and you can name your character whatever you want. While most of the game is in first person, occasionally there will be moments where you can see yourself.

An early objective of the game is to get to know Ariane.  As you do, she asks about you, and you get to make stuff up about yourself.  For example, the first question Ariane asks are what you are doing on the island. You can say “vacation” or “business”, and just like choosing male or female, there are things that only vacationers get to do, and things only business people get to do.  There are at least five other similar choices you can make.

This will likely result in confusion over choices, and make extra work for me in writing it, but it just adds to the fun of repeat play.

I made this image for fun. Not sure if it will ever be relevant to the plot or not, but for now it makes a great loading screen.

One of the joys of making your own game is throwing in the odd pop culture easter egg just for the fun of it. 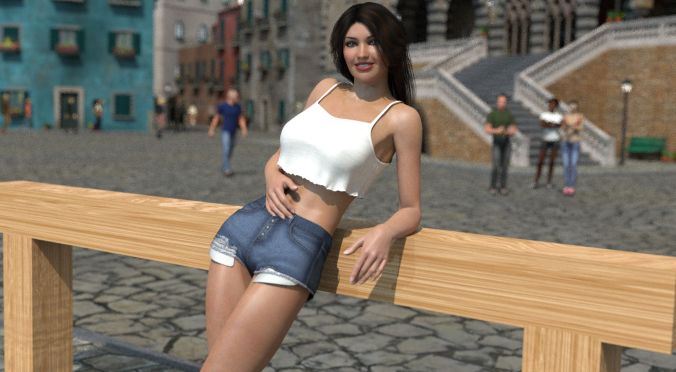 I have been hesitant to post anything about this, because I have a bad habit of starting something and then bailing on it half way through, but I am far enough along on this project to tell you about it.

If you follow me on Facebook and Tumblr, you may have noticed that my latest Ariane pictures look similar and she is dressed the same. That’s because I am making a new game.  Currently titled “Ariane in Paradise”. 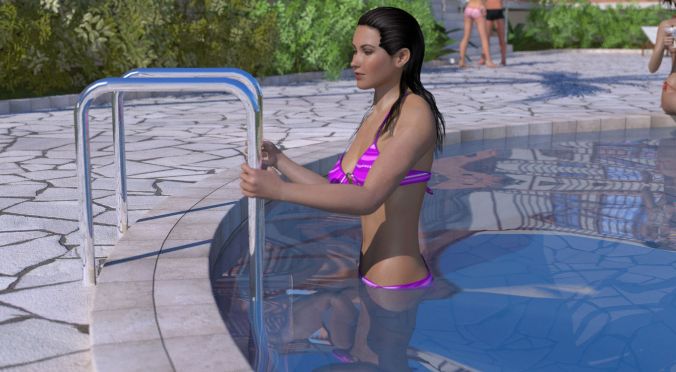 After experimenting with the genre with Something In The Air and Rachel and Ariane, I wanted to go back and do a second game like Date Ariane that is a little more chaotic and spontaneous.  My original thought was create a new character, but I like Ariane too much so I decided I just need a new setting.

I thought about a tropical island game since I made the epilogue of Something In The Air, but wasn’t sure how to go about it. Then I saw VDateGames has already done a couple of them,  Zoe is free to play if you want to get the idea of where I am going with this.

It also helps that over the years I have collected a bunch of tropical themed 3D sets that I have barely even used. 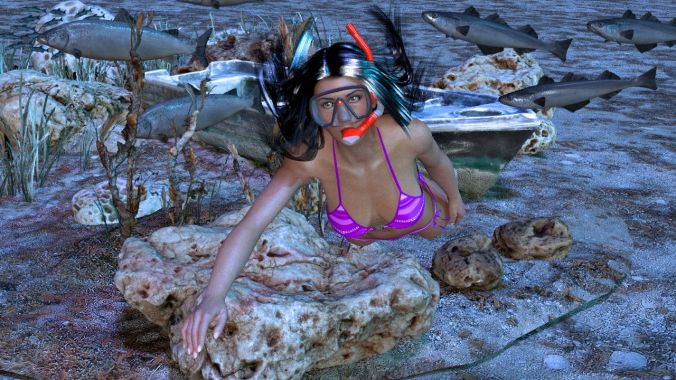 The basic premise is this: Ariane follows Rachel to a fictional tropical island, where for Rachel it is a work trip: she is doing photo shoots for the entire week. This leaves Ariane all alone during the daytime hours to find some fun things to do.  You are on vacation alone on the same island where you meet Ariane at the hotel pool.

I don’t want to get into details, because they are likely to change, but I wanted to throw that premise out there to tie all the stories together.  You are not playing the same character as Date Ariane and SITA, in fact you can choose to be female if you want, that means you have to meet Ariane all over again.

I made it a fictional place, because making it a real place could offend people that live there.  A fictional place allows me to, for example, create relaxed nudity laws. It also helps that my collection of exotic island sets include Mediterranean, Caribbean, and Polynesian looking props, so a generic tropical island in an unnamed ocean keeps the anachronisms down.

I have no time table of when it will be done. SITA and Rachel and Ariane both took around two years.  I’m doing this for my own enjoyment, and I hate deadlines, so it will be ready when its ready.