Ariane in Paradise #7: The Other Day 3 Paths

This walkthrough contains major spoilers to the end of the game. If you are playing the game with walkthroughs and used walkthroughs to get to day 3, and want to “win” the game, just STOP NOW!

So the day starts giving you the choice of clothes to wear.  You go over to Ariane’s hotel room and she informs you she is spending the day naked.

Now, once out in front of the hotel room, Ariane says she wants to go to Rachel’s wrap party.  Last walkthrough was getting to do that.  This is to go the other way.

I have no more questions for now. 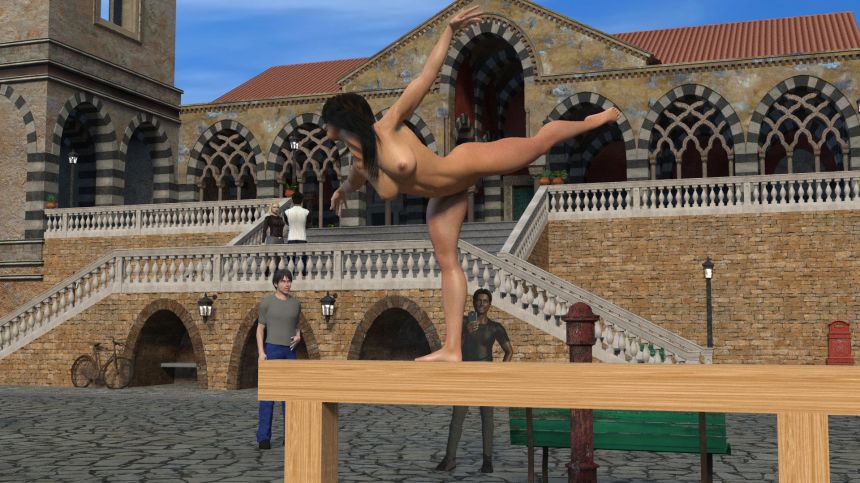 When the bus arrives there are two choices you can make.  We are going to start by mirroring the beginning of the last one.

You will meet the cyclist again, but we are not going to follow her advice this time.  You can do the “Sex in the Grass” scene or skip ahead.  See the last walkthrough.  There are a number of choices, and you can pick whatever until you get downtown.

Cut through the middle of town.

Ariane does a naked gymnastics routine that draws a crowd.  Some gray haired lady starts yelling her that draws the attention of the police. You get the “Gymnastics in the Nude” achievement here.

There are two outcomes of this scene that depend on a decision from Day 1: If you went on the yacht trip on day 1, you are brought into the station for questioning.  If not, you are left with a warning that running around naked in town is frowned upon.

If you do get dragged into the police, you are introduced to a B story mystery that is totally solvable, but never actually gets solved “in game”.  The dialogue varies depending on choices made during that yacht trip.

Since Date Ariane, I have played with the idea of putting some side mystery in the background of images that players can figure out for themselves. I tinkered with it in Something’s In The Air to show what happens to other characters depending on your path choices.  This time I just went for it, but thought players would just skip over it if I did not point it out somehow.

The upshot of getting dragged into the police department is the “Police FAQ” achievement by asking the police officer all the questions you can.  Unfortunately most of the answers are not satisfying.

If this is the path you are on, skip the next section.

Naked Dancing In The Streets

When the bus arrives there are two choices you can make.  This time we are going to talk the driver into letting us on the bus.

If you asked what was in her backpack earlier, say:

Is there anything in your backpack that can help?

Once on the bus, choices don’t matter that much.  Once you leave the bus you “follow the music and do some dancing like day 1, but this time naked, which draws some unwanted attention and a talk with the police.  You get the “Dancing Naked in the Streets” achievement here.

This is the point that this path merges with the gymnastics one.  I talked about it above. 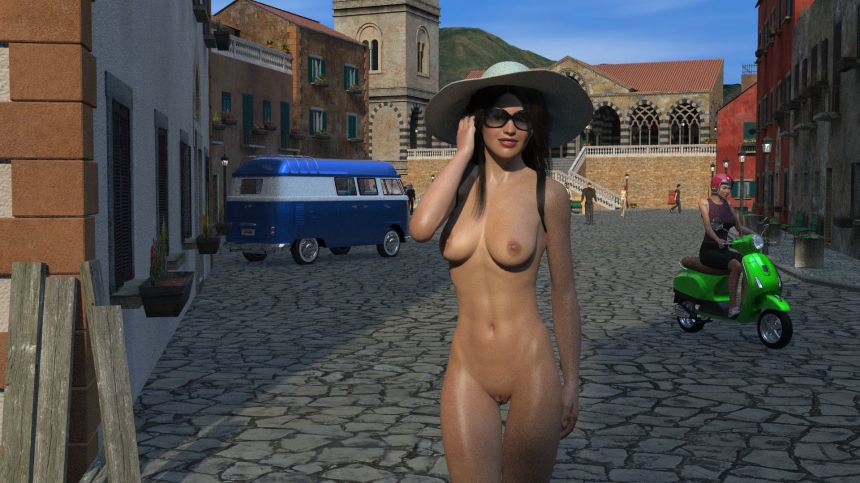 You already decided what happens next

If you previously decided to walk to town and learned about the scooter rental, you go and find out that thanks to the police delay, there are none left.  If you rode the bus, then you are stuck in the street with a decision to make.

There are two paths you can take, but you already made this choice.  If you never did either hike (hike to the lake on day 1 or hike to the waterfall on day 2) you decide to go on that hike you talked about but never did.  If you already did one or both of those hikes, you go to the beach instead.

If this is the path you have to take, it starts very similarly to the hike to the lake from day 1. But instead of a getting to know each other, there is a review of the last 3 days that happen.  Of course there are various versions depending on what you actually did.

Again most of the choices do not matter much until you actually go skinny dipping in the lake. It also doesn’t matter if you are not a fan of public nudity, Ariane still insists on going skinny dipping.  You earn the “Lake Skinny Dipping” achievement for it.

The swim ends when Ariane’s tormentor from earlier shows up: the grey haired lady from the gymnastics routine or the spanker from street dancing.  Ariane sends you out to deal with it, and you get your first meaningful choice:

Dry off with Ariane’s towel, get dressed, then grab Ariane’s stuff.

Dry off with Ariane’s towel, put your shoes on, then stuff your clothes in Ariane’s bag.

Once back on the road, you decide to go off trail and find a scenic spot to do an impromptu naked photo shoot.  There are two versions of this depending on your choice back at the lake.

The photo shoot gets interrupted by a phone call by Rachel, and Ariane putting on her “emergency bikini” which should look familiar to Date Ariane fans.  You then get a chance to tell Ariane something.  Your best choice is:

This has been the most incredible three days of my life!

Any other chance leads to an interesting discussion that does not really please Ariane and leads to you missing out on the final achievement, which is “Goodbye Fuck” which comes after Ariane finishes packing.

Then the final scene here is my original final scene, I came up with when I outlined how the game would go.  I knew it would be bittersweet, so I quoted the greatest bittersweet romantic ending ever: Casablanca, well except for the “Say Nothing” which leads to a quote from Buffy the Vampire Slayer.

If this is the path you have to take it starts with a return to the outdoor restaurant you may have visited on day 2.

You discuss “naked day” so far and find that it hasn’t gone so well, and decide your best strategy would be to walk back to the hotel by following the shore from village beach to south beach.

If you got stuck at the police, there is an expanded discussion about the yacht mystery.  If you didn’t there is a number of topics you can discuss.  Your best choices are:

The whole idea of naked day… or Just a rhetorical question…

Picking the middle choice leads to an awkward discussion that will cause you to miss the final achievement.

Regardless, you start walking down the beach, which is crowded near town, but opens up as you walk further down shore.  You run into a couple playing volleyball one on one, and this leads to another achievement if you can beat them.  Here’s how:

Sure that could be fun. (This grants you the “Naked Volleyball” achievement)

Aim to the right

Aim to the left

And you are rewarded the “Ball Handler” achievement.

Yet another photo shoot starts on this path. These are more candid shots along the beach.  Ariane does it as long as you walk naked with her.

This one works a little different than others. Ariane does 12 things on the beach, some normal, some sexy poses, and they rotate. You can take a picture or you can wait for what she does next.  Once you take two pictures, Ariane will ask you to pose for one, and you can pick one of three poses, then Ariane starts posing again and you can take two more before Ariane gets a call from Rachel.

If you didn’t make a bad choice at the restaurant, you watch Ariane pack and then earn the “Goodbye Fuck” achievement I mentioned above.

The final major thing that happens in the game, and this happens no matter what path you end up on in day 3, you revisit your vacation in pictures.

Whats pops up is dependent on all the choices you made throughout this play of the game.  There are 91 possible pictures that could show up here, 134 if you count both genders, but I have no intention of forcing anyone to play both genders beyond the two short achievements.

The final achievement is “Full Gallery” which involves playing the game multiple times and unlocking at least 75 of those 91 possible pictures.  Tips for achieving this will be the subject of the final walkthrough.