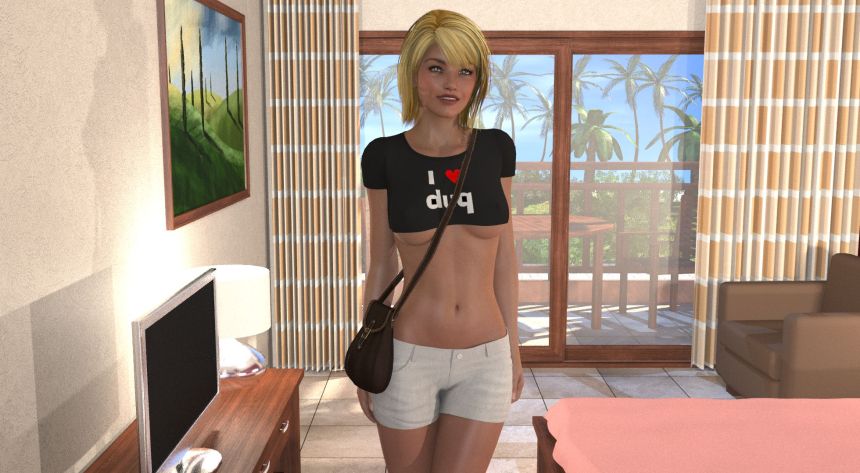 This walkthrough contains major spoilers to the end of the game.  If you are playing the game with walkthroughs and used walkthroughs to get to day 3, and want to “win” the game, just STOP NOW!

If you reached Day 3, you basically won the game already.  You no longer have to keep track of points.  Two of the three paths are opened up to you, and the third path is blocked because of choices you already made.

So, if this is your first time playing day 3. Play it without spoilers once before coming here and getting all the secrets revealed. 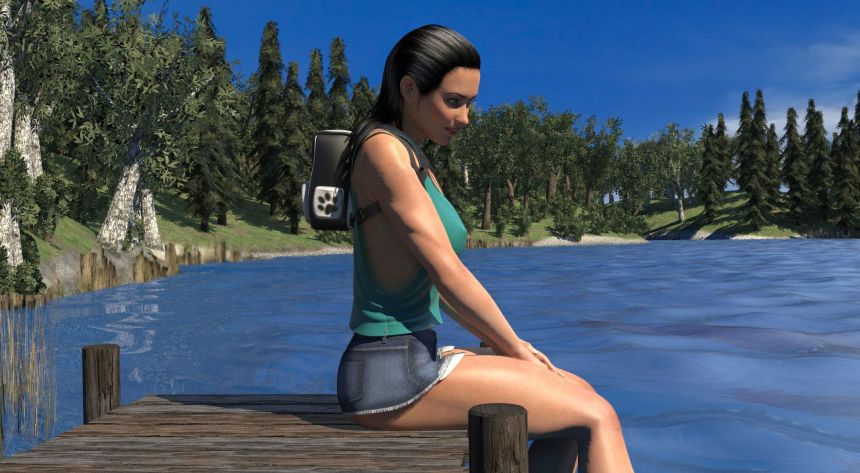 So the day starts giving you the choice of clothes to wear.  You may or may not have a selection to choose from.  There is an “I ♥ DUQ” souvenir t-shirt for males, or crop top for females, or other options if there are clothes you didn’t wear yet.  Doesn’t matter what you pick.

You go over to Ariane’s hotel room and she informs you she is spending the day naked.  She always wanted to, but never had the opportunity because it was illegal, and she was too scared to do it alone.  She decided she could do it with your help.

Her desired goal is to make it to Rachel’s wrap party on the other side of the island. This “desirable” walkthrough is how to get there, and it is available no matter what you did previously.

Now the truth is the “undesired” paths are more interesting, but we will do those in the next part.

The things you say in Ariane’s hotel room are irrelevant to story progress, but Ariane has some fun responses.  This is actually true throughout the Day 3 stories. If I don’t give you a suggested choice, pick whatever you want.

Outside your hotel, you get to ask Ariane why she is doing this and how she plans to go about it. Asking all the possible questions will unlock the “Hotel FAQ” achievement. The fast way is:

I have no more questions for now.

Once you are done asking questions, the bus arrives and Ariane is not allowed on.  You can talk the bus driver into it, but for this path we want to:

On the road, you meet a cyclist who suggests a fix to your problem of getting across the island: Rent an electric scooter.  She also suggests a shortcut to town. Choices in this scene do not matter again, there is just different information given depending on what you ask.

Hold up, let me take my shorts off and try it myself

This choice leads to a scene that unlocks the “Sex in the Grass” achievement.  If you are in a hurry, the first choice saves a lot of time.

Once you reach downtown, you are given a major choice.  This is the difference between the “Desirable” path and all other paths.  For this walkthrough we want:

Stick to the small streets and alleys to get to the marina.

This takes you to the scooter rental place and they still have scooters to rent.  I know that most electric scooters are the stand up kind, but the sit down kind do exist, and are likely to become more common in the near future.

For the next little while, there are many meaningless choices. My first draft of this had a 9 minute stretch of endless story with no choices and even I got bored, so I forced myself to add some choices to make and some different responses to make the game more interactive.

Once you make it to Pirates Cove, you watch Rachel at work and then go to the after party and meet a new girl named Trish, because a party is not a party without being introduced to strangers you will never meet again.  This unlocks the “Nice Outfit” achievement.

Once you sit down, you are given an opportunity to ask Rachel a question.  The best choice is:

Based on what I have seen here… , it seems you do not like modeling

Every path of day 3 has an opportunity to ask Ariane or Rachel a question that will come off as “too personal” which results in a less than desirable ending.  In this case you miss out on a fun photo shoot if you made the too personal choice.

You do a couple of photos in the sci-fi bar and then Rachel suggests having some photo fun somewhere else in the theme park.  You can go to a Pirate set or a Western set, and either choice results in a “fun” photo shoot that can be naked, or in fun costumes.

I’m sure most of you will go for the naked ones, but I actually had a lot of fun making the silly costume ones.

The path ends with Ariane and Rachel sharing a scooter, both of them naked, followed by a bittersweet goodbye.

There is no path in the game where Ariane stays with you.  Some have asked if there is one, but it never made logical sense to me.  Doing all the paths will explain all the reasons why that is.

Yes, it is possible that your character and Ariane stayed in touch after their trips, and maybe got together, and lived happily ever after, but I leave it up to the players imagination to fill in those blanks.