Since June of 2015, there has been a sometimes less than friendly war between Daz Studio and Poser which basically share a small community of 3D rendering hobbyists.

That was when Daz released their latest advanced model Victoria 7 specifically designed to not work in Poser.  Now some people have found often complicated ways to get Vicky 7 to work in Poser, but because it was not designed for that program its use was limited.  At the time, Daz Studio had features, like physics rendering with their IRay renderer, that Poser could not match.

Then in early 2016, Poser 11 came out with their own physics renderer Superfly, and a bunch of other techie stuff like “Subdivision surface morphing” (what the community now calls “chips”) which allows a better control of the face (or other parts) for the purposes of animation, and adaptable figure weighting making it much easier to create new figures.

This was great and all, but it went over most of our heads.  How does this help us Poser users make beautiful pictures like the people using Daz Studio are doing?

While we got some new models to work with, like Dawn and Dusk by Hivewire3D, Paul and Pauline by Smith Micro, and Project Evolution by Erogenesis there was only limited support and add-ons.  Basically, many hobbyists like myself were stuck with Victoria 4.2 with a bunch of add-ons to fix her many flaws.

A few of the more techie hobbyists got together a year ago to start working on a new figure that would take full advantage of subdivision surface morphing and adaptable figure weighting that most of us still don’t understand and came up with a new model named La Femme.

I made the above picture to demonstrate her features.  This is the model straight out of the box with zero morphs and add-ons.  Notice the joints: Shoulders, elbows, hips, knees, hands and feet.  I didn’t have to adjust a single joint to get it to look good, it did it on its own.

The point is is that the weighted figure can do any weird pose that humans can do and look like a human is doing them.  That is what adaptable figure weighting is all about.

The “free” version  comes with 140 facial morphs and 30 facial “chips” that can be used to make almost any face you want.  At the top of this post is a La Femme version of Ariane I made playing with those 140 dials. 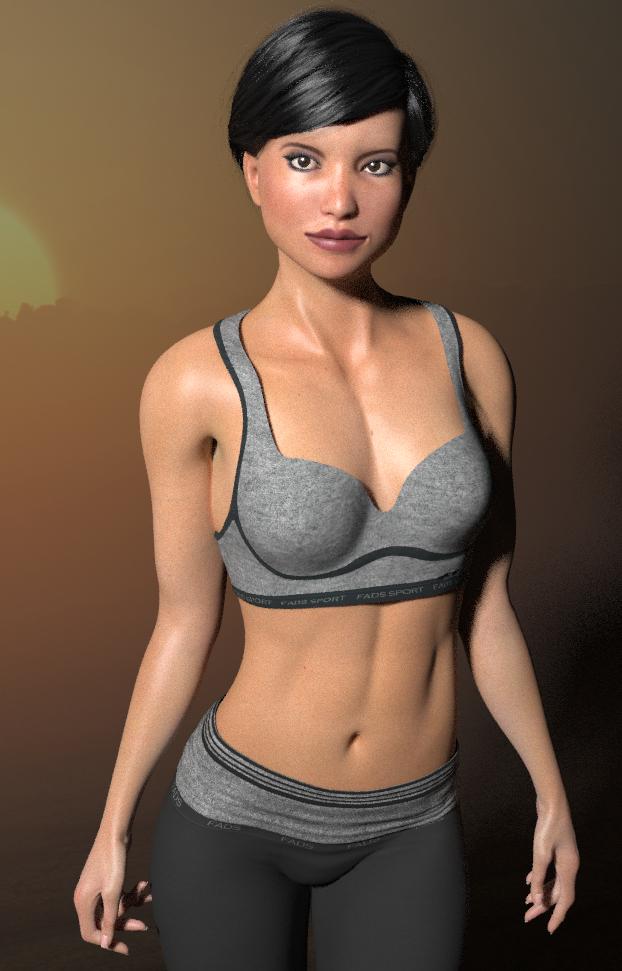 If you’re into this stuff, you probably want to get the body morphs, too.  This is not free and comes in two parts.  There is the basic body kit, which adds a ton of new dials to controlling the body shape, and the high definition kit that doubles the polygons in certain parts of both the face and body to significantly increase the detail.  These two were designed to compliment each other and make pretty much any kind of body you want.

Bottom line is it surpasses Daz’s Genesis 8 in complexity thanks to the use of tools not available in Daz Studio yet.

The Big Question: Will it be supported?

Even thought I have already created a La Femme version of Ariane, I plan to finish Ariane in Paradise with the V4 version.  Partly because I am too far into the project now to switch models, and partly because there isn’t a very good selection of clothing or poses available yet.

Genesis 8 currently has many advantages.  There are more users of Daz Studio than there are of Poser, and there is a big catalog of characters and clothing available for her.

To be successful, La Femme needs similar and continuing support.  More characters, more clothing, more exclusives.  Because it cannot be used in Daz Studio, that support has to come from us Poser users.

I personally will be watching with great interest.

One thought on “3D Wars 4: La Femme to the Rescue”