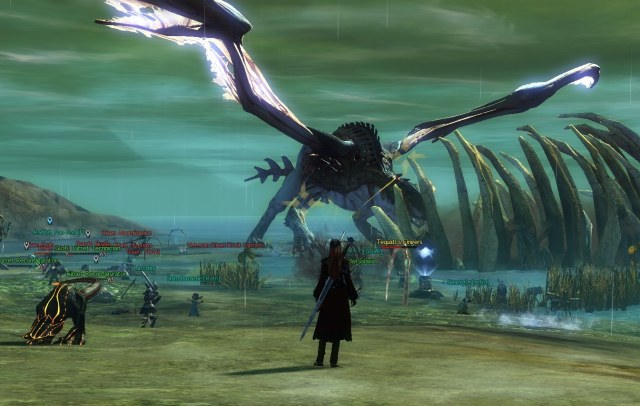 In the past 6 weeks or so I have got two characters all the way up to 80, and the weird thing is that I almost never duplicated content doing it. One character is human and priory, and stuck to Human and Sylvari zones.  The other is Norn and Order of Whispers, and stuck to Norn and Charr zones.  Except for 4 or 5 personal story missions every character does, I have not repeated content — and I still have 5 zones of content I have yet to explore on either character.
That is an amazing amount of content for a newly released MMORPG, and why I have been playing for 6 weeks straight without getting tired of the game.  I remember I was playing DC Universe Online for 3 weeks and got a hero and a villains both up to max level in only about 3 weeks and pretty much exhausted all the content there was to play.

When I first started playing the real game and not the pretend beta game, I had two major concerns that were quite annoying: Personal stories and crafting.

GW2 has personal instance missions which can be done as a team but they are designed to be solo missions.  A lot of them were either too hard to play for the level they were supposed to be at, or were bugged where you could not finish and had to get out and start over.  The good news is that Anet is responding to complaints about these missions and fixing them. Many were fixed in the 9/25 update, and many more in the 10/1 update. Unfortunately, many bugs remain.  The most notorious is in a mission called “Forging the Pact” which is one of those 5 missions that everybody has to do.  Despite ANet saying it is “fixed” in the last two updates, it still isn’t.

The second concern is in crafting.  Just before launch, ANet increased the requirements to crafting green “Masterwork” weapons and armor, but did not increase the drops of the materials to craft them.  As a result it is basically impossible to specialize in two weapon/Armor crafting professions, because you will never get enough drops to do both, unless you “farm” for drops, and even then ANet has anti-farming programming in place.  My plan was to have my Ranger craft Huntsman and Leatherworks so that she always had the latest gear, but was very disappointed to learn that was not possible.

The In Game Economy: Heavy Deflation

However, things changed as the economy started to flatten to a market clearing prices on items.  In the trading menu, you can buy pretty much anything cheap, and getting cheaper.  This is very bad for people trying to make money, but for people that want stuff, it is good.  You no longer have to “farm” for stuff, you can just buy it cheap in the trade center.  And you don’t even have to craft to get the latest armor and weapons, in fact pre-crafted armor and weapons are always priced below their materials price, except for rare and exotic stuff.  Thanks to the in-game economy, the only reason to craft at all is free experience points to level up.

Anet, to their credit, set up a true laisse fare economy, where supply and demand rule the day.  World of Warcraft trading was limited to each server so it was possible to “corner a market” and raise prices. The Trade Center combines stuff from 50 different servers, so market cornering is impossible.  Of course, as you play you  gather materials and get weapon\armor drops.   You can sell or salvage drops to get rare materials that might be worth more, or if the drops aren’t worth it, you just sell to a merchant.  Only the latter choice (sell to a merchant) stops supply from rising.  Everything else results in increased supply and lower prices across the board.

The only thing that is increasing in value are gems.  Gems are purchasable with real money, and can be traded for in game gold, so if you are willing to put up the bucks, you can buy whatever can be purchased.  In the first few weeks, people needed gold to get lots of stuff to have the best characters.  Then people started getting rich and bought gems, increasing their value vs. gold.  With all items deflating in price, the only way to make money is invest in gems. 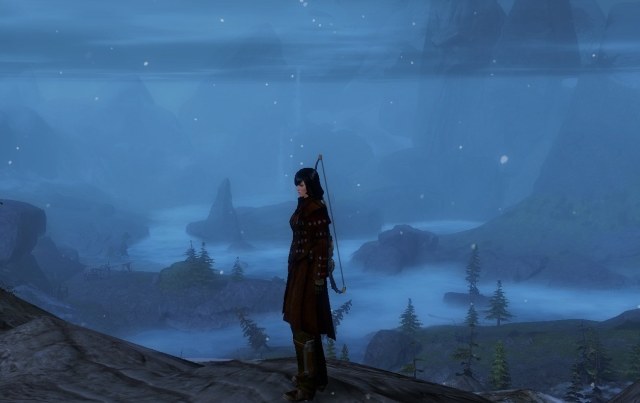 One of the cool features of GW2 is the “level down” mechanism that allows you to do lower level content at the appropriate difficulty.  No taking your level 80 character to level 5 zones and slaughtering everything in sight.  If you go to a level 5 zone, you will play as a level 5-7 character, and can be attacked and killed by these low level creatures.  This makes all content playable and challenging, and worth doing.  The original plan is that when you play low level areas, you would still get drops relevant to your level (and sometimes you do), but most of the drops are appropriate to the level of the zone you are in.  If  you are trying to gather crafting materials for low level weapons or armor, this is a good thing.  If you are trying to collect high level rare or exotic items, or get lots of XP from events, then you pretty much have to stick with appropriately level zones.

The bad side of this is as time goes by, most players will be either playing in low level zones, or high level zones, just like every other MMORPG out there.  Now ANet has thought of this issue and if you are in one of those neglected middle zones where no one else is playing in, you will get bonus XP for kills and events, and sometimes the bonuses exceed the normal XP if you are in a particularly barren land, but I am not sure how big of an incentive that will be.

There was a post on Reddit’s GW2 board that got a lot of attention:

God save me from some aspects of the MMO community. You people are impossible. You have ruined a ton of AAA games in the last few years – you DEMAND treadmill gated endgame, beat it in a month, and then whine and abandon a game for not having enough content (you all know exactly the games I am talking about). Now a game has to literally FORCE you to stop doing the same mindless activity over and over and actually do different things to enjoy endgame, and you all bitch and whine because you can’t grind yourself to boredom in a month like you have done with every other MMO.

You are destroying the viability of MMOs by being entitled impatient kids who can’t make fun for yourself, you have to have a game hand it all to you on a silver platter and whine and bitch if you don’t get it fast enough, or complain because you have to work hard to get something you want because they won’t let you run the easiest dungeon over and over or run the same dynamic event over and over. […]

Maybe the problem isn’t the MMO, maybe the problem is you. Maybe you need to examine the way you approach an MMO – many of you will spend hours playing a FPS with no progression because it is fun – and then you whine because spvp has no progression and say so “what incentive do I have to do spvp if I don’t get better gear?” (Actual statement I have heard).

Guild Wars 2 is a reinvention of the MMO, and I read with disbelief people complaining about some of the best features.

I was visiting GW2guru which is one of the largest GW2 forums but not official. Some clueless player posted a thread about “What would you change about GW2” and he had “No down leveling, bring back the Trinity (healer-tank-wizard), and bring back Henchmen” as his 3 changes. I had to post that those are precisely the three things that makes GW2 GREAT!, and that he should go back to WOW if he doesn’t like it. There were an amazing number of people on his side. (sigh)

There is an awful lot of content in GW2, and it is likely going to be late October/November before I will see it all. Being an altaholic I have no problem re-rolling, but those who don’t can find dynamic events, WvWvW, or dungeons to do forever.

GW2 is not perfect, and there are legitimate gripes to be made. But I hate when complaints about the game are along the lines of it not being like all the other MMOs, because that is precisely the point.