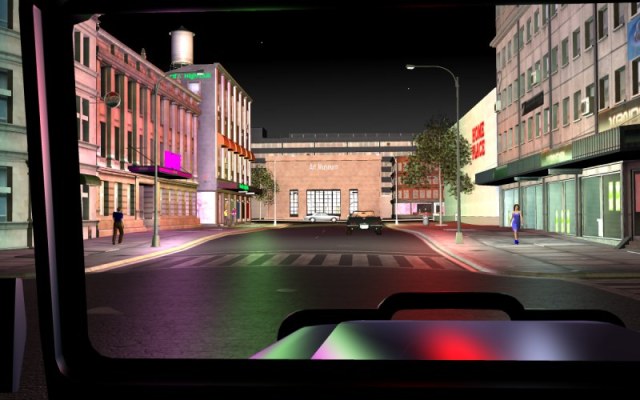 I’ve started work on a sequel to the Dating Sim.  The new one will be of a very different nature, because I have pretty much exhausted all my good ideas that fit in the format of the first game, and now have to come up with some new stuff. More on that later.

But since I have to redesign the whole downtown anyways, I may as well redo all the pictures in the first game as I go.  Its way too much work to do this from scratch, so I purchased some new models.  Even then it took a good day and a half to do just one picture, the “downtown” picture above.

The picture is supposed to have a lingerie store, a night club, an art museum, a home store, and a dress shop.  What took about half the work was that the generic building models I purchased had to be turned into these things.  The other half of the work was that the generic models were designed to be rendered in day scenes, and the date sim takes place at night, thus requiring a bunch of custom lighting scenarios.  There are still some things I am not completely satisfied with (people waking on the sidewalks?) but it looks OK.

A humorous thing in the new picture.  Most home stores today seem to be “box” stores (Home Depot, Lowes, Mor Furniture, IKEA, etc.), so I made my “Home Place” store literally from a single box. 🙂

There are about a half dozen more pictures in the game set in downtown to go. Then the nightclub, the art museum, the restaurant, the gas station, and convenience store are all going to be redone eventually. There are other places in  the dating sim that use video game screen shots as well, but it would be too hard to to redo them all. I’m just doing specific places I plan to reuse.

Some people think that working in 3D is easy, that the only people that do it are people that can’t draw. The truth is that an original 3D work requires at least as much work to do as a 2D drawing, it is just a different kind of work.  It takes just as long to do 3D animated movies as it does to do traditional drawn animated movies.

3 thoughts on “3D Art Is Tougher Than It Looks”