After finishing the Renpy version of Date Ariane back in July 2015, I have been tinkering with the idea of what would happen if Ariane (of Date Ariane fame) and Rachel (of Something’s In The Air fame) were to meet.

I made both games for my own entertainment, and I am glad they have been successful. So I started tinkering with Rachel and Ariane being the third part of the trilogy.  I’ve never tried writing a story like this, and so I’m not sure what I am doing, and kind of making things up as I go along. 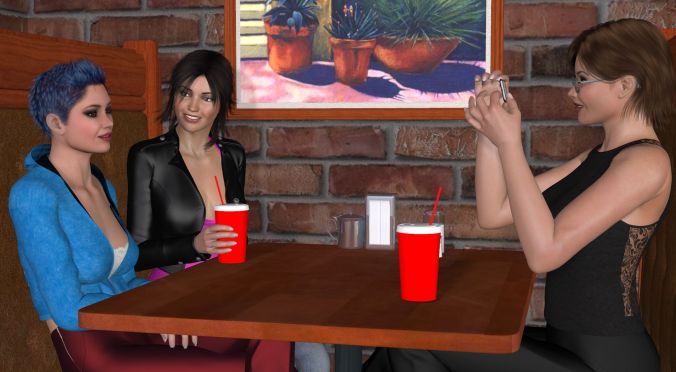 So far it is coming off as “official fanfic”. I struggle with the writing part, but I am really having a lot of fun doing the pictures part, which is why I keep going.

I released part one in October 2015, a piece at a time until the final part was released on Halloween, when the story was set.

It starts with a “meet cute” as all rom-coms do, in this case they show up to a Halloween party dressed the same.  As they get to talking they discover they are the same in a few other ways as well.

After Ariane finds out Rachel is a supermodel, Rachel takes Ariane home and tests her in a few ways. Ariane passes the tests, and they end up getting drunk together.

It ends with Ariane revealing her never before revealed job: game developer. Rachel, being a game addict herself, is intrigued and wants to get together again.

Rachel Dates Ariane is set about two weeks later, or mid November, though there was over a year before I released it in November 2016.

It almost follows a typical “Date Ariane” date. Rachel comes over, and they play video games (tying back to the end of part 1) then they go out for dinner. This time to a pizza place they both like (Pizza Mia shows up in both games). Then back to Ariane’s and some naked hot tubbing.

Rachel then makes a (intentional?) move that results in the two of them in bed naked together.  Can two mostly heterosexual women find love? or is it doomed to “friendzone”? Is that necessarily a bad thing? 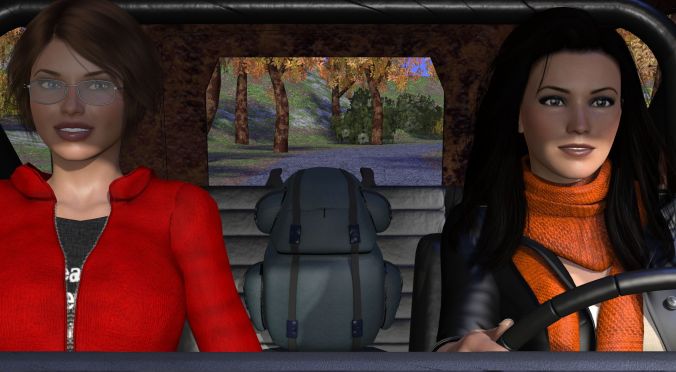 I just released part 3: Rachel Takes Ariane’s Photo. I tried to make it more game like with choices to eventually turn it into a game, which I actually made, and found it repetitive as most of the choices end up in the same place.

So I just converted it to HTML and posted it all at once. It’s about 23 HTML pages total using simple links to the choices you pick.

It takes place still in November, with still autumn colors (which is part of the plot). The two key scenes for me are the “short cut” and Rachel setting up cameras.

I establish in the games that Ariane is a bit of a dare devil or “Action Girl”, but never get a good opportunity to demonstrate it. The short cut scene is Ariane demonstrating that part of her personality to Rachel, who being a science geek is not all that thrilled with that side of Ariane.

Then when we get to the the actual picture taking, Rachel is the one demonstrating her personality, talking about photography in a geeky way and having it go way over Ariane’s head. The photo session itself is very clinical and very professional, the way a supermodel likes it, and with the exception of one version of the photo shoot, no where near as sexy as the ones Ariane did in Date Ariane.

Control of what happens to the photos is in the hands of the photographer, or the party that commissioned the photos in the first place. That means Ariane has no control.

The objective here is to add a little bit of conflict. Differences that could get bigger later.

I’m working on a part 4, which basically would be act 3 of a typical 3 act story: Things get worse before they get better. It’s tough to write characters I like struggling with stuff, so I am struggling writing it. I don’t know if it will be linear like parts 1 and 2, or whether there will be multiple versions based on choices like part 3.  Depends on what works best.

Even if you don’t like the writing, I think I did some great pictures here. The pictures are actually bigger than they display on the web page, parts 2 and 3 are 1960×1080. Just right click and view picture to see the full sized images.

7 thoughts on “Rachel and Ariane: An Experiment in Storytelling”