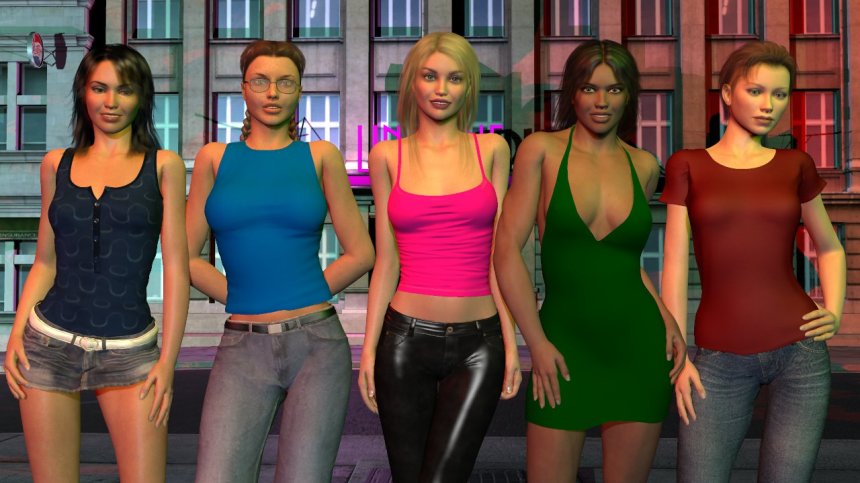 After over two years of work, Something’s In The Air is finally done (for now), with version 1.0 now released. You can download it here for Windows, Mac, or Linux.

Two years seems like a long time for a fairly short game, but this was a very part time hobby, and I would not have bothered to make it if I wasn’t having a lot of fun making it.  This game is mostly for me.  If others enjoy it, well that’s cool.  If others hate it, well I don’t care, because I like it.

So the beta version has been out for almost 3 months and has been downloaded over 47,000 times, so most of you are already familiar with the game.

So what has changed from beta?

First of all the number of endings have been reduced from 40 to 25, but only 1 ending has actually been eliminated. That was the fake cliffhanger trailer “Do You Know Any Gymnasts?” ending which I decided not to finish, so I dropped it, and removed its content.  In its place I added 5 new “epilogues” which I will discuss later.

I also dropped 7 “bad” endings like “Game Over” or “Bus Ride Home”.  I didn’t actually drop them, they are still there, they just no longer count as endings.  Lots of beta players complained that when stuck on 39 of 40 endings, it turns out they were missing some stupid bad ending.  So now you don’t need to worry about that. I also merged 8 “redundant” endings with other endings. For example the 4 “Amusement Park” endings are now just one ending, since they were basically just different versions of the same ending.  Ditto the two Bonnie endings, and the two photo shoot endings, etc.  That’s a total of 16 endings dropped, and 40 – 16 = 24.

The 25th ending is a new Ariane story which you will have to find on your own.  If Whiskey made Ariane act a little crazy in Date Ariane, wait until you see what Tequila does in SITA.

In place of trying to reach all the endings, there is now a new “completionist” task of filling out a “Player’s Notebook”.  As you play the various stories, you collect info on 12 different major and minor characters. It is possible to finish the 25 endings and still have lots of blank spaces in the notebook to find.  Instead of collecting endings, you collect info.

A couple of rule changes: First, the 4th story is not available until you unlock at least 5 of 6 “clues” which help you discover the over all plot of “Something’s In The Air”.  You can find out how you are doing with unlocking these clues in the Gallery section.

Second, after you completed the 25 endings, and view the complete list of endings in the gallery, you are given a choice of only one of five characters to pursue a further relationship with: Ariane, Rachel, Bonnie, Wendy, or Paula.  Whichever you choose, you will jump into a short epilogue featuring that character, and what happens next.

In real Japanese dating sims, once you made your choice, the only way to make another choice (and see other endings) is to start the whole game over again.  I made it easier:  Once you made your choice, you can go through the ending list again, and see the other 4 endings.  Your choice of character is noted in the notebook, otherwise it does not matter what you pick.

What else is new?  Besides the new story and epilogues, I improved some of the graphics, corrected dialogue mistakes, and added sound effects during the sex scenes.  This was a widely requested addition, so I figured, “Why not?”  If you do not like them, there is a file in the game directory called “customization_notes.html” that tells you how to remove them, or make your own.

Also in the game directory, you will find all the pictures and renpy files for the game.  Note that just because I made these files easy to view and edit does not mean you can make and release your own version of the game. It does mean you can customize your own copy of the game however you want.  I love modding games. so I made SITA easy to mod.  What you wont find are the audio files.  They are locked up in an archive for license and copyright reasons.

For you Renpy geeks, beta used version 6.14.1, final uses 6.15.7.  People that could not run the beta might have better luck with the upgraded Renpy.

Hope you enjoy the final version. Note that due to new variable names old saved beta games will not work in the 1.0 version, but 1.0 uses a different save directory, so you should not run into any conflicts there.

If you find any bugs or mistakes, post them in the comments.  If I get enough bug reports, or a serious bug is found, I’ll release a version 1.1 to address them, but my game plan is to mark SITA as “done” and start working on the next project.   (Anyone interested in a “Girl’s of SITA” calendar?)