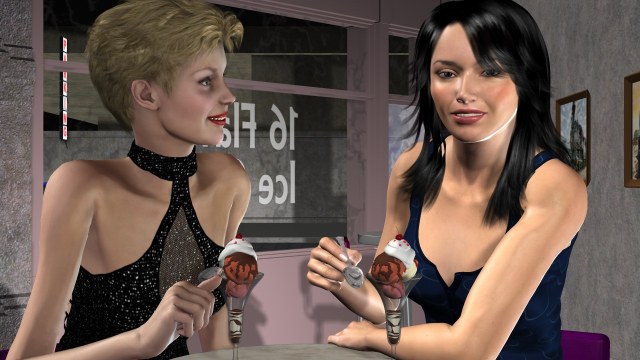 I ran a 24 hour alpha test on a Something’s In The Air Demo I was thinking of releasing, and it was good that I did.  Feedback was decidedly mixed, so for those that keep asking when will I release it, the answer is, “When it is ready!” and it is not ready.

As a novice visual novel author, I learned a couple of things about writing during the alpha test.  Lesson #1 is I need to work on the stuff I’m not good at just as hard as the stuff I am good at.  I have a talent for visuals and plot, and a weakness for dialogue.  So I have been writing serviceable dialogue quickly to fit with the terrific visuals and plot, and as a result I have been losing the characters. In other words I got a lot of rewriting to do.

Lesson #2 is I need to trust my instincts more.  If I can’t get excited about a plot or a scene, then it will suck, and it either needs to be rethought until I do get excited about it, or dropped completely.  On the other hand, I need to stop ignoring those feeling of “Wouldn’t it be cool if I…” moments because as it turns out: yes it would be cool, and it is exactly what I should do.

Lesson #3 is I need to forget about this ever becoming a commercial success.  In an effort to do something different, I have taken many different genres, threw them in a blender and hit “puree”.  One of the comments I got was along the lines of, “Is this supposed to be a comedy? or a slice of life drama? or a plotless sex romp, or what?”  My answer is yes to all.  Like the Date Ariane game, there is enough “adult” content to keep it out of the mainstream, but not enough to interest the adult gaming market.  It’s sort of a romantic dramedy with some mystery and speculative fiction thrown in. By design, it defies categorization, meaning it will not be marketable.  Make the story that I want to make, and let the chips fall where they may.

So, for not the first time, and probably not the last, I have a new plan of attack. My original plan was to have 6 stories, all of approximately the same length and content.  Well one of those 6 stories, I have spent a lot of time trying to figure out how to make it good, and in the spirit of lesson #2 it needs to just be cut.  So now it is 5 stories long.  Another story is good but very short, and I have been thinking how to “balance” it and make it longer with no good ideas.  In the spirit of lesson #3, “balance” is a marketing concept, and therefore it can be ignored.  So, the stories will be exactly as long as they need to be, no need for lengthening short stories, or editing long ones.

This has greatly simplified the master plan.  I’m finally seeing the light at the end of the tunnel.  Post production is going easier than I expected, thanks to finding some decent free and cheap royalty free music and sound effects which adds a whole new dimension to the game.

Good feedback, even though some of it was negative, has made me more excited about working on, and eventually finishing this project.