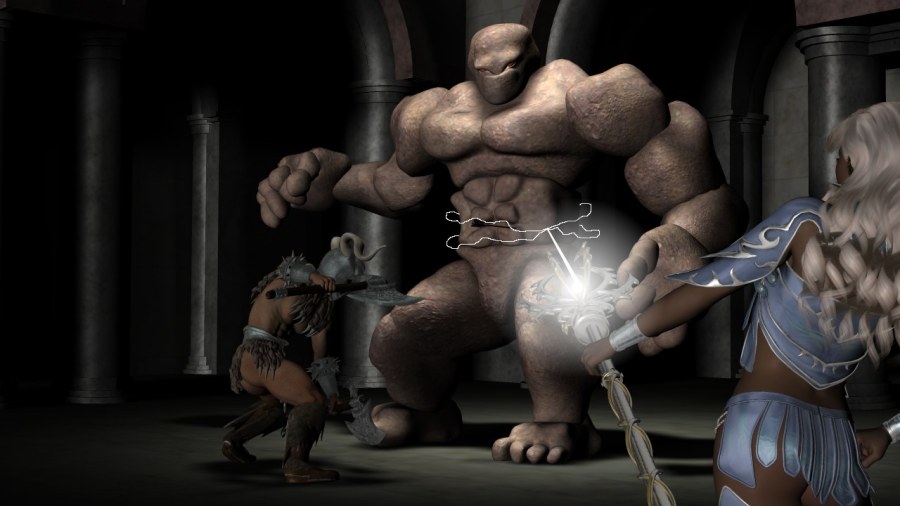 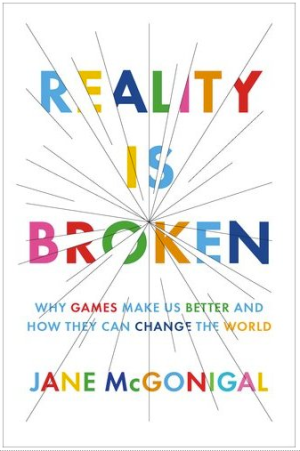 I have never actually done a book review before on this blog, but my previous two blogs I did them all the time.  After reading Reality is Broken, I felt compelled to write a full formal review, as its contents are perfect fodder for this blog.  In fact there is enough here to fill a good half a dozen blog posts, but then why would you need to read the book?  So for now here is a brief introduction to the themes and ideas contained.

Reality is Broken is a new book by first time author Jane McGonigal, a professional game designer.   She starts off quoting economist Edward Castronova, who said “We’re witnessing what amounts to no less than a mass exodus to virtual worlds and online game environments.”, then goes on to quote some amazing stats like, the total amount time spent in World of Warcraft by all players adds up to 5.8 million years, and 500 million people spend at least an hour a day in online games for a total of 3 billion hours a week, and the average child will spend over 10,000 hours playing video games before the age of 21, the same amount of time they spend in school from 5th grade to 12th grade.

While many people react negatively to such huge numbers, considering it a waste of time.  McGonigal insists that it is not enough, that we should have more people playing online gaming.  She believes the world is better off with more gamers.  Being a fan of ideas that defy conventional wisdom (as my last two essays demonstrate), I had to find out more.  I have a hard time figuring out if Reality is Broken is a book about games disguised as a book about social issues, or a book about social issues disguised as a book about games.  I guess if you are librarian trying to figure out where to put the book, this would matter, but for us average readers it does not.

There are basically three themes to this book.  The first is the one that resonates the most for me:  Games make us happy.

The emotional impact of games is something game designers are very interested in, and spend a lot of money researching, so it is no surprise that many modern video games are designed with making players happy.  Consider what I wrote about last week in regards to “finding a purpose” to our lives. The four types of purposes that bring us meaning and lasting happiness:

Now consider these four categories of “purpose” in the context of playing video games.  Almost all games can hit 2 or 3 of those, and the MMORPG can hit all four categories.  From a positive psychologists stand point, gamers are some of the happiest people on the planet.

I know what some of you are thinking.  Is the happiness you get playing in virtual worlds just virtual happiness? frivolous, fleeting and temporary?  No, not according positive psychologists.  Dan Gilbert himself (see Happiness 101) says there is no discernible difference between synthesized happiness and real happiness.

Which leads to the second theme of the book: Gamers are escaping from a broken reality.  McGonigal list 14 ways that gaming worlds are superior to real worlds.  She is not talking specifically about online video games at this point, but many different kinds of games that help us deal with reality.  The majority of the book is about these 14 “Reality Fixes”, and as she goes through each one she discusses two or three different games or gaming systems that encourage these reality fixes.  She discusses dozens of different games, some I am familiar with, some I’d love to play, and some I do not.

Anyone looking into game design should read the book if nothing else than for the various ideas that are likely to come to mind while reading.  I came up with an idea myself while reading, and have gone as far as researching some special programming I would need to do to get it to work.  More on that later, maybe.

And finally the third theme: Games can save the world, and gamers are our best resource to do just that. 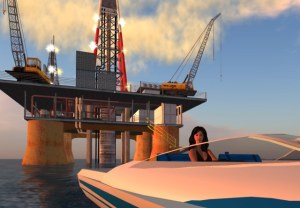 Games can, and have been designed to help us focus on real world issues.  McGonigal is a game designer who works primarily on a category of games know as Alternate Reality Games, or ARGs, which are designed to form communities and tackle problems, primarily problems created by the game authors, but they can also tackle real world problems like “peak oil” which I discussed 2 posts ago.   In 2007, McGonigal was part of a design team for an experimental ARG called World Without Oil.  The original 1,900 players from all walks of life did not find any solutions, but came away mostly optimistic that people can come together in a crisis and adjust their lifestyles to fit new realities.  Since then McGonigal has been part of other socially conscious ARGs, and is confident that games like this can one day change the world.  But in order to make these world changing games to work, we need gifted people to play them.  Enter the “gamers”.

She discusses the fact that more than half of the students today spend 10,000 hours playing games before they turn 21.  That by definition, that makes them “virtuosos” at gaming.  The biggest question is what are all these “virtuosos” capable of?  She breaks down 4 qualities that long time gamers possess: 1. Blissful productivity — the understanding that happiness comes from hard work and not from passive activities like watching TV.  2. Urgent optimism — the desire to tackle an obstacle combined with the belief that there is a reasonable hope of success, or desiring the “epic win”.  3. Social fabric — the ability to form tight communities built on trust, like guilds.   4. Epic meaning — the desire to be part of something bigger than themselves, even if that bigger thing may just be fictional.  Notice that these four qualities correspond to the four “categories of purpose” listed above.

McGongal’s goal is to find a way to focus the talents inherent in gamers to tackle the problems the world face today and “fix reality”.

If you are interested in these ideas, but not up to spending $14 on the e-book, you can get a 20 minute summary from her speech at ted.com, or there is also a website realityisbroken.org you can read, or sign up to find out about the latest world changing ARG games.

I have not decided how true the thesis is.   Being a gamer, an amateur game designer, and a participant in ARGs, I at least understand the thesis.  I want to believe the thesis is true, but understanding the worlds problems and finding solutions is unfortunately a fraction of the problem.  Experience is that all new ideas that diverge from the “business as usual” tends to face overwhelming political opposition no matter how good or true they are.  The corporate powers that be seem to think that video games are a form of soma to pacify the masses into complacency, and I am not sure that they are wrong.

At the very least I accept the first theme: Games do make us happy, and I mostly accept the second theme: Games are an escape from reality.  I constantly hear complaints from politicians that video games are too violent and inspire more violence.  The evidence is not there to back that up.  As games have gotten more popular, violent crime has gone down, not up.  Places where sex games are common, like Japan, have actually seen a reduction of sex related crimes.  Maybe sex games should be more popular everywhere.  In these respects games have already changed the world for the better.

But there is another way that games can change the world and it is outlined in my last three blog posts.  From The Energy Situation, I pointed out that we are quickly running out of resources needed to grow the economy.  From Happiness 102 I pointed out that materialism, the driving force behind the running out of resources, does not really bring us happiness anyways.  And finally with Reality is Broken we learn one activity, gaming, can be a real source of happiness.  While gaming is not always a carbon neutral activity, it can be.  Thus gaming is a way to reduce our need for diminishing resources while still making life livable. Oddly, I previously posted this idea before.

But it is important to keep all of this in balance.  McGonigal concludes her book:

Reality is too easy. Reality is depressing. It is unproductive, and hopeless. It is disconnected, and trivial. It’s hard to get into. It’s pointless, unrewarding, lonely, and isolating. It’s hard to swallow. It’s unsustainable. it’s disorganized and divided. It’s stuck in the present.

Reality is all of these things. But in  at least one crucially important way, reality is also better. Reality is our destiny. This is why our single most urgent mission in life is to engage with reality, as fully and as deeply as we can.

That does not mean we can’t play games. It simply means that we have to stop thinking of games as only escapist entertainment.

Good games can play an important role in improving our real quality of life. They support social cooperation and civic participation at very big scales. And they help us lead more sustainable lives and become a more resilient species.

5 thoughts on “Reality Is Broken: A Book Review”