Between national news and recent personal experiences, I believe we are on the verge of one or more technical apocalypse. This could come two possible forms:

Either, technology advances to the point that it bypasses the need for humanity, or we grow more and more dependent on tech and internet connectivity and then a series of events causes the whole infrastructure to collapse.

We could also see first one and then the other.  I see both of these as very real possibilities, though I can’t say how likely.  I just want to briefly explain what we are up against.

The Vulnerability of Tech

On Christmas, my website vanished. The culprit seems to be a corrupt zone file which is used to tell the internet where my website is located. I got the site finally back up and then it vanished again due to extremely high traffic on the server. Not sure if that high traffic was directed at my site or the 30 other sites on the same server, but it took a move to a different server to get the site back up.

Two seemingly unrelated incidents in a week is suspicious, or just really bad luck. It is causing me to rethink my web strategies for the future, wondering if there is a better less vulnerable way to do what I do.

But that is just my sad story. How about the intentional takedown of both XBOX Live and PSN on Christmas Day causing much havoc in many households as many new games and consoles could not be played. Before that we all witnessed our first real cyber war between Sony and North Korea. Before that the very organization in charge of internet infrastructure was hacked. Before that was the #gamergate trolls and their malicious tricks directed against female gamers and their supporters. Before that hackers broke into private accounts of female celebrities posting private pictures.  These are just the headlines in the last 4 months.

We are looking at a new form of warfare / terrorism that is only going to get more common.  All tech is seemingly vulnerable. Even the supposedly anonymous and untouchable corners of the web have proven vulnerable in recent weeks.

Our dependence on internet connected tech is only going to get larger in the near future, which is going to make such actions more damaging. 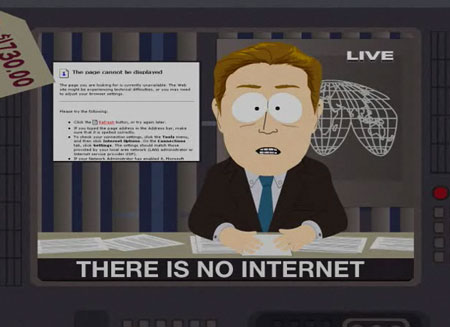 The Vulnerability of Human Labor

We are at a point technologically where artificial intelligence, a sci-fi dream as long as I can remember, is becoming a reality.  This year we saw a chatbot pass the Turing Test, cars that can drive themselves are here as well. Those in the know say that the real innovation is machines learning themselves, which is becoming more real everyday.

From someone who studied this stuff for years this is all very exciting, but the big dark cloud behind the silver lining is what is motivating these developments:  companies want to replace human laborers with robots. When cars (and trucks and busses) that drive themselves prove to be cheaper and more reliable than human drivers, what happens to the 3 million people in the US that make a living as drivers?  Most likely their jobs will disappear.

That’s just one example, hundreds of service occupations are vulnerable to automation in the near future. Because we have grown dependent on service jobs here in the US, what is the future of employment?

Then what?  A “small claims court” app where you can file a claim and have a judgement in minutes messaged to your phone?  So much for the need for lawyers.

Demand for doctors is likely to be in decline as well for similar reasons.  Neither will disappear completely, but job security will not be what it once was.

There will always be a demand for labor, but if these efforts to automate are successful, the demand is destined to go down, even while the human population continues to rise.  How do we create a society where an increasingly large segment of the population is unemployable. What kind of economy is possible if most of the population can’t afford anything?

Maybe we will build an intelligent system to micromanage a stable economy adjusting taxes and welfare automatically to keep the economy healthy for all.

Sounds like a good idea, until the the intelligent economic manager decides there are just too many damn humans to support (which is already true) and figures out a way to get rid of some.

It may sound implausible, but recognized geniuses like Elon Musk and Stephen Hawking are warning about this happening in the near future if we do not take precautions now.

The Clash of Two Futures

Foretelling the future is damn near impossible. I cannot say how much of either of these visions of apocalyptic futures are likely to be true, but I can guarantee both will happen to some degree.

The need for drivers will drop with driverless cars, that is inevitable.  It is also inevitable that some will try to prove their vulnerability by purposely causing automated cars to crash, possibly in retaliation for lost jobs.

Part 6: Internet memes and fake news cause problems for democracy

I saw an article last week on a list of things that have nearly disappeared over the last decade. The list consist of:  calling, newspaper classifieds, dial up internet, encyclopedias, CDs,  land line phones, film photography, yellow pages and address books, catalogs, fax machines, wires, hand written letters.  All of them are still around, they are just becoming archaic or obsolete.

I suspect that over the next decade, there will be other things that are common today that will become archaic and decline over time.

Broadcast Network Television – Rupert Murdoch who runs Fox is already trying to kill the Fox broadcast network and turn it into a cable/Satellite only network.  He also has plans to turn all of his news sites into subscription only, which is likely to fail miserably, but his plans for TV actually make financial sense.  If so, NBC, CBS, and ABC could follow suit, and Broadcast TV as a mainstream media outlet will be dead.  Now if AM Radio can survive for 100 years, so can Broadcast TV. It will just have a lot more infomercials and pointless talk shows (just like AM radio) to fill in the gap.

Satellite Television – You are probably wondering why I would predict the downfall of Satellite after predicting the end of broadcast.  It is quite easy: The future of TV is instant access.  This is doable on internet based TV services like Uverse and FiOS, and even possible with cable services via broadband internet if you have a receiver that can buffer the show as you download.  It is not doable on Satellite. This plus the huge overhead cost of Satellite TV services will spell doom for these services.  I’d even go as far as to predict that one of the two major satellite services (Direct TV or Dish Network) will  stop satellite operations and close, or jump to the IP TV market instead.

Multiplex Theaters – Multiplexes with their 24 small theater screens are likely to head to the scrap heap. Large theaters with big (or IMAX) screens capable of 3D and digital projection will replace them. The multiplex experience is too close to home theater, and with high costs of going out to the theater, it is likely to decline in popularity.

DVDs – Just as CDs started to disappear last decade, DVDs are likely to disappear this decade with widespread On Demand TV and game download services.  BluRay will never be more than a niche market as well. This will also include video games on DVD media. Not only will places like Blockbuster and Hollywood Video start disappearing, but those Red Box dispensers will too eventually.

Printed Newspapers and Magazines – Between the Internet, and the Kindle, print is dead.  Online news papers will still exist, some may even thrive via online delivery options, but papers you read by spreading it out on the kitchen table will disappear.

Big Box Bookstores – Just as the giant chain record stores have disappeared with the demise of the CD, the giant chain bookstores will disappear with the demise of print.  Small specialty shops will still be around (rare book stores and comic book stores), as will book departments in department stores. But as more people convert to tablets, like Kindle and the Nook, and access to online libraries to go in them, the market for printed books will be dead.

Libraries – Between budget cuts and new technology, libraries will get rarer and rarer. All the major cities and universities will still keep them around, but with the primary use of the libraries being free internet sources these days, providing free “hot spots” around town is cheaper and can promote commerce in those designated areas.

Gas powered vehicles – Over the next decade, oil production is going to be level or in decline. We are going to be forced to find ways to use less oil, or live in a new Great Depression. Considering the sheer number of gas powered vehicles there are, it seems quite bold to predict their demise, but I foresee natural gas powered hybrids, plug in hybrids and pure electric vehicles (including electric bicycles) dominating the road within a decade… either that or $20 a gallon gas.

Incadescent bulbs – CFLs and LEDs for the win! This one’s a no brainer.

Hard Drives – The one weak point in computers today are the hard drives. They are physical devices with high RPM spin that are almost guaranteed to fail within 5 years. Average life span is around 3. The thing that has kept them around for so long is that solid state drives are still slower, hold less data, and more expensive.  I believe hard drives are at their peak right now.  There is little need for faster or bigger hard drives than what we have now.  If solid state drives can catch up to where hard drives are today, and that is a very likely scenario in the next decade, hard drives will become obsolete.

Desktop computers – You know those big boxes with 2 or 3 DVD burners and 2 or 3 big Sata drives powered by 500 watt power supplies sitting under your desk like the one I am using right now? Archaic dinosaurs by the end of the next decade! I think the 10s will see the end of Moore’s law of bigger and faster, replaced by smaller and more energy efficient. The big desktop computer under my desk is likely to be the size of my ipod touch in 10 years powered by a 30 watt power adapter — and just as powerful.  Its tempting to just predict everyone will use laptops, as that trend is already coming to pass, but the primary attraction of desktops is gaming, which is doable on laptops but it is awkward.  The primary components to the desktop is the full size monitor and the full size keyboard.  Monitors won’t be shrinking in size any, and LED backlighting, touch screens, and 3D capabilities will become more common place.  This pretty much guarantees there will be a place for non-mobile computing, it is the CPU part of the computer that will be getting smaller and more energy efficient.  It may even get small enough to carry around with you to move to different keyboard/monitor “terminals”.

The key to the next decade is energy efficiency.  All signs point to energy being a major concern in the next 10 years.  The more energy efficient our tech, the less impact energy shortages will have, and the cheaper it will be to live.