The Second Life world seems to have its panties in a bunch over a new 3rd party utility by Rezzable dubbed Builderbot.

Basically, Builderbot can copy every object in an Second Life sim and put it into an OAR file that can be loaded onto any OpenSim server, thus making a near exact copy (scripts as usual are a problem).  They also are creating an OAR editor, and (even more impressively) a way to port OAR files into Second Life, thus making transfers from OpenSim to Second Life possible.

There are two things that are upsetting to the Second Life community: 1. Builderbot does not look at copy permissions or ownership, it just copies everything on the sim. 2. Rezzable was planning to release the SL to OAR part of the Builderbot for free.  These things had the whole community grabbing torches and pitchforks ready to boycot Rezzable. Rezzable finally gave into demand and will not be releasing the SL to OAR part free.

Hate to be the person that disagrees with pretty much everybody on this issue, but maybe I’m the only one who sees the big picture. Builderbot is an awesome idea and a key component to expansion of the 3D web. It is probably the most important 3rd party SL utility ever, and if Rezzable doesn’t release theirs, someone out there should release something similar, including the ignoring copy permissions and ownership part.

Lets start with the obvious need for Builderbot. Currently, putting a build in Second Life requires that you actually be in Second Life and spend sometimes weeks building there, paying monthly tier as you build. If you want to take your time and do it right it will cost you. Then there is the occasional system hiccup that could cost you hours of work.

Builderbot does two things, it moves the building part of the project off the SL grid. You can now build your server build on your own computer, no system outages to worry about. You can save and backup your work to OAR files as often as you like. If you make a mistake, just load the latest backup. When you are done building and ready to move your build to SL, it can be moved into SL in a matter of minutes, or at most hours. This is the primary design of this program.

Second Life as it was initially concieved is a flawed system. Whoever thought it was a good idea to equate Real Estate with computing power, I hope they have learned a valuable lesson. I have written about this major flaw before. Bottom line, SL runs on thousands of computers, and as many as 80% are not doing anything at any given time.

The obvious fix is to store unused regions in memory and load them up to an available server as needed. Linden Labs could cut their server need by 50-75% with such a system.

They could also bring up mirrored instances of extra busy servers. Want to give a concert that 1,000 people can attand? Just copy the build on 10 different servers that can service 100 people each. If more people want to show up, add more instances.

None of this is possible without a reliable backup system. OpenSim has OAR files, SL has got copybot (basically nothing). What Rezzable is doing is creating a tool to save SL regions as OAR files that can be stored when not in use, quickly loaded when needed, quickly mirrored on multiple servers. Obviously there is some extra programming involved to do all this, but considering the cost savings it is definitely something worth doing.

Why it is necessary to ignore permissions

The biggest concern from most of the Second Life players, is that Builderbot ignores permission. Copy a region, move to OpenSim, and everything in that region has no permissions at all. Anything in Second Life could be quickly copied, permissions be damned.

Rezzable argues that there is nothing in SL that cant be copied already. Players argue “True, but you shouldn’t make it so easy.”

Building a region is like building a website. I build websites myself and anyone can steal my code by right clicking and click “view source”, and there is nothing I can do to stop it. It is super easy.

What most Second Life players  are asking for is DRM management for SL content!

DRM has been a failure everywhere it is tried. Music, video, ebooks, the case against DRM is pretty clear. Read boingboing.net to find out why. How many of you asking for DRM for SL have stripped DRM off a music or video file so you can play it in the format you want? 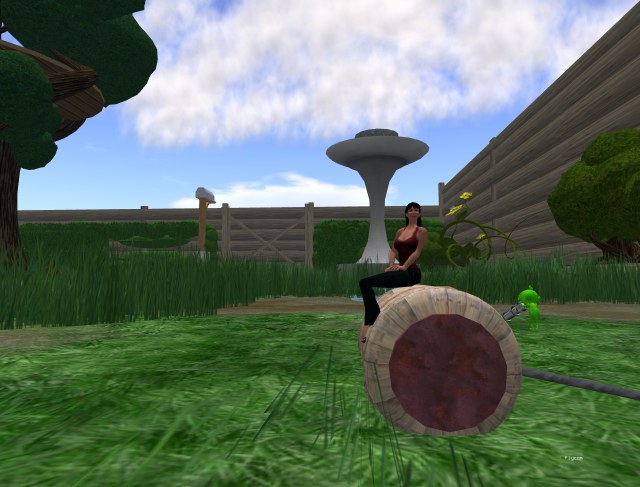 I come from the 3D Artist community where people build and sell detailed models for use in other people’s projects. All of these models are distributed DRM free and fully copyable and sharable. Yes, there is piracy in 3D models, but it is part of the cost of doing business. But since I do artwork I may want to sell, I pay for all my models and commercial licenses.  This business model is where the 3D web (SL and Opensim) will eventually go.

Most SL players are thinking in L$ economic terms without seeing the big picture. Eventually there will be an xstreet for all grids, and the ability to buy a pre built full region builds (OAR files) to load on to your personal server or hosted server is likely to be a new popular alternative method to static build exploring.

There is much money to be made in building custom regions.  Especially commercial clients who would not dare copy other people’s work. Individual objects and props have their place in the new marketplace as well, especially if they include commercial licenses that will allow the objects to be put into other builds.

I believe this could be a huge market. If I could explore lag free by loading OAR downloads to my computer based open sim server, I would love it! If I could edit them and share with others to show my edits, that would be really awesome as well. I’m quite certain I am not the only one.

The possibilities for Second Life are numerous as well. Can you imagine the fun of going to an SL club that has a different build for every event? Random combat locales? Roleplay setting that can be brought up as needed?

Like it or not this is the future! Second Life is just the early primitive beginning. In a few years we will probably wonder what all the fuss was about.