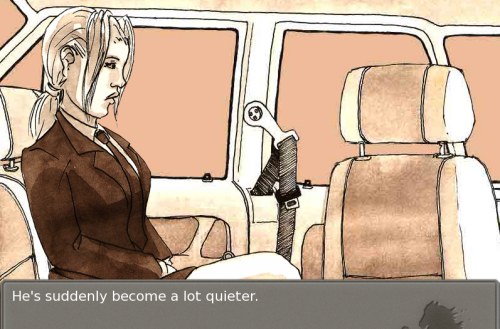 In my last post I discussed Japanese Dating Sims and that they are a subset of a general category called Visual Novels.  The Visual Novel is a hybrid media form that has never caught on yet, but thanks to devices like the iPad, they could in theory become very popular. We just need a breakaway hit to finally emerge and then all the copycats will follow.

So what is a Visual Novel?  Well that depends on what direction you come from.  From a static media perspective, the visual novel is a comic book with choices.  From a video game perspective, its a graphic adventure game without an inventory to keep track of.   They all have text and pictures. Most have choices to make, some tell a linear story (aka Kinetic Visual Novels) without choices. Most are hand drawn graphics.  Some have voice over, music, sound effects, some pictures are animated.

Just as comic books have a reputation of being about superheroes (since the majority of them are), Visual Novels have a reputation of being about romance and sex because the majority of them are.  But just like Comic Books do not need superheroes, VNs do not have to be about romance or sex. Some of the new independent producers are doing adventure, horror, sci-fi, etc. Most of the new ones stay in the “rated T for Teen level”

The best way to learn about visual novels is to just download a few and try playing them.  A couple of good sources, many of which are free:

http://www.renai.us/ – A collection of mostly free independently produced Visual Novels. Windows, Mac, and Linux links available for most VNs.
http://vndb.org/ – A database of Visual Novels from around the world, and thus mostly from Japan in Japanese.

http://www.renpy.org/ – Ren’Py is an open source freeware Visual Novel development and publication suite used by many independent VN creators.
Lemma Soft Forums – A forum dedicated to making of Visual Novels. A lot of creators meet here to post their work, get feedback, help each other out, etc.

I have been trying out a few:

Fantasia, Realm of Thanos – A Fantasy Adventure. Rated PG. There is also a sequel I have not tried yet.

Each Uisage – A mystery story set on a remote island in 1985. I love the original watercolor painted graphics. Rated R.

Digital: A Love Story – A story told over BBS messages on 1988 computers, some of which you have to “hack”. Fun concept PG.

Is There a Future Here?

As a commenter in the last post pointed out.  Visual Novels today come from two different sources.  Japanese games translated into English, and independent authors/artists mostly doing it for fun in their free time.  Neither source is likely to bring about any breakaway hits anytime soon.

The Japanese games tend to be very Japanese, and tend to cater to the shy teen males in Japanese prep schools.  They are very dialogue heavy, so you can spend time and get to know the characters.  As one commenter puts it:

This is the secret of the visual novel. They are socialization simulcra. I don’t mean a simulcra in the sense of a simulation, an accurate model which can duplicate responses. I mean it in the sense of a substitute that elicits and provides many of the same responses. Visual novels are not dating simulations, they are dating substitutes. Virtual dolls. Little computer friends.

Consider their first person presentation, their stylized graphics that focus on expressive faces and communicating emotion, the hours of voice acting directed at the player/protagonist who never breaks the illusion by speaking with a voice. All highly effective and relatively cheap ways to simulate social interaction.

Consider also the mundane hours of banter in place of traditional narrative. I found it boring while playing Yume Miru Kusuri but if I consider what was said, how long it took to say it and what meaningful new information was exchanged, then I compare that to a typical session of socialization in Second Life I’m stunned by how similar they are. I don’t mind that when talking to my “real” friends, because a lot of social is not story telling, it’s simply connecting and expressing support and interest in each other. I was bored by a simulcra of it, but even for me it quickly began to be captivating. I can only imagine how strong the impact must be for an anxious awkward high school kid in a society like Japan’s.

The problem with these dialogue heavy cultural specific visual novels is that they tend to be weak on plot.  These games cater to a specific demographic that does not exist much outside of Japan.

The other source are the independent sources. Ordinary people with some talent for writing and/or drawing and/or programing who are looking to express themselves in a medium they find suited to their talents. This is what attracted me to the medium myself.

On the other hand, the visual novel is a media format that anyone can break into, is not dominated by anyone outside of Japan yet.  Even better, I mentioned above that the iPad is quite possibly the greatest visual novel distribution device ever made, and yet there are practically no visual novel apps available yet.  Comic book publishers are already creating comic book apps for the iPad, and a visual novel is essentially a “choose your own adventure” comic book.

The market isn’t there yet, but it has potential.